7 Out-of-This-World Watches With Meteorite Dials, From Rolex to Omega and Beyond

Watchmakers have long been obsessed with the cosmos. For the most part, however, they’ve indulged their interest by making timepieces, from the earliest astrolabes to the working planetarium wristwatches of Van Cleef & Arpels, that boast a functional relationship to the heavens.

Over the past five years or so, many have decided that beyond emulating the workings of the universe, they want their watches to incorporate actual pieces of it. So they’ve turned to the only material available: meteorites that originated in asteroids or exploding planets and improbably made their way to Earth, only to crash land in places like Sweden or Namibia, before being discovered, traded, cut and acid-treated into discs small enough to fit the dial of a wristwatch.

Now, the selection of timepieces featuring dials distinguished by the perfectly geometrical lines of the “Widmanstätten” pattern found in octahedrite iron meteorites (the type most commonly used by watchmakers) are cropping up all over the place. Especially this year. De Bethune, Louis Moinet, Louis Vuitton and Rolex all introduced new pieces featuring meteorite dials at the spring watch events. Check them out below, along with a handful of other examples of luxury watches that do double-duty as extraterrestrial specimens. 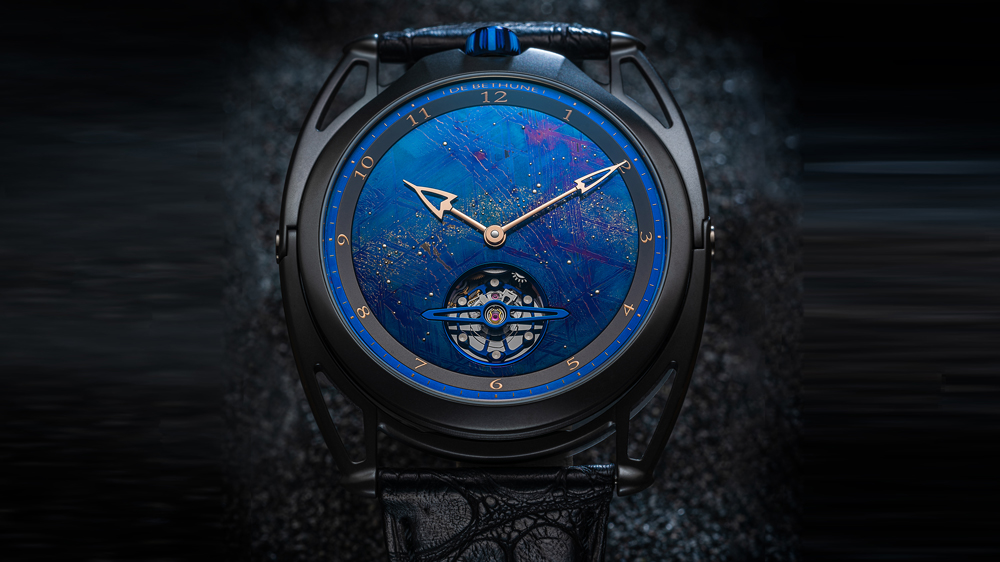 The newest timepiece to emerge from the De Bethune workshop is not the first one to feature a blued meteorite dial (the DB28 Kind of Blue Meteorite holds that distinction) but it is the first to feature a slice of Muonionalusta Meteorite, thought to be the world’s oldest. Discovered in Sweden in 1906, the cosmic shard is believed to have struck the earth more than one million years ago. Available in a limited edition of 10 numbered pieces, the DB28XP Meteorite is encased in black zirconium. It retails for $138,000.

Introduced last fall, the U.S.-only limited edition of the Hermès Arceau L’heure de la lune frames its dramatic double-moon display against the backdrop of a mesmerizing meteorite dial. Housed in a 43 mm platinum case, the piece takes its cosmic inspiration a step further: A Pegasus designed by the “dreamer-designer” Dimitri Rybaltchenko adorns the moon at 12 o’clock, while the moon at 6 o’clock evokes the satellite’s rocky, rugged surface. The model retails for $69,950. 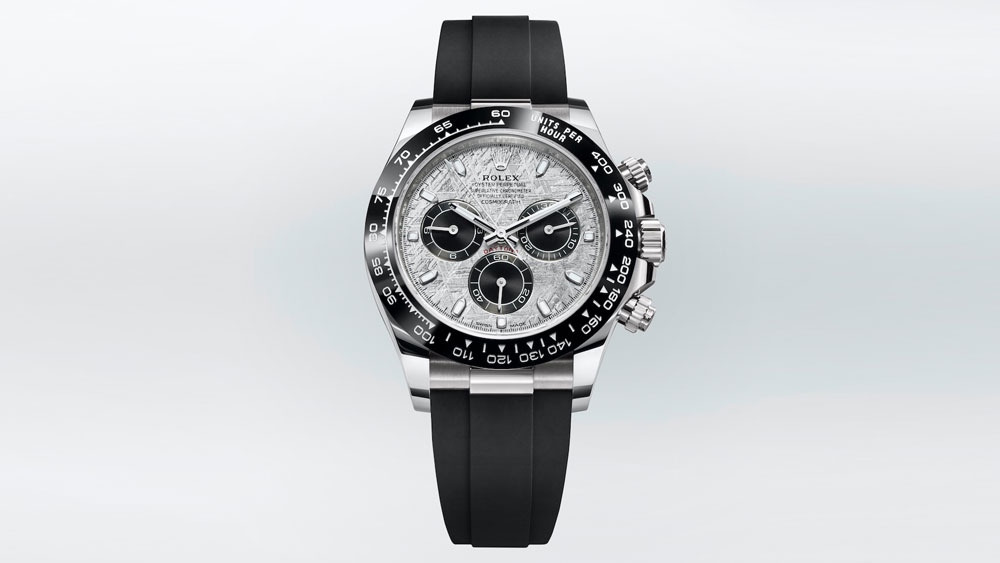 This year, Rolex adorned the dial of its Oyster Perpetual kingpin, the Cosmograph Daytona, with a sliver of silvery meteorite. With its black Cerachrom bezel (complete with tachymetric scale) and black Oysterflex bracelet, the $34,050 piece, which is housed in a 40 mm white gold case, looks like the horological equivalent of an extraterrestrial tuxedo. It’s not the only piece in the OP collection to bear a slice of the heavens (the GMT-Master II also features a meteorite dial), but it may well be the most elegant. 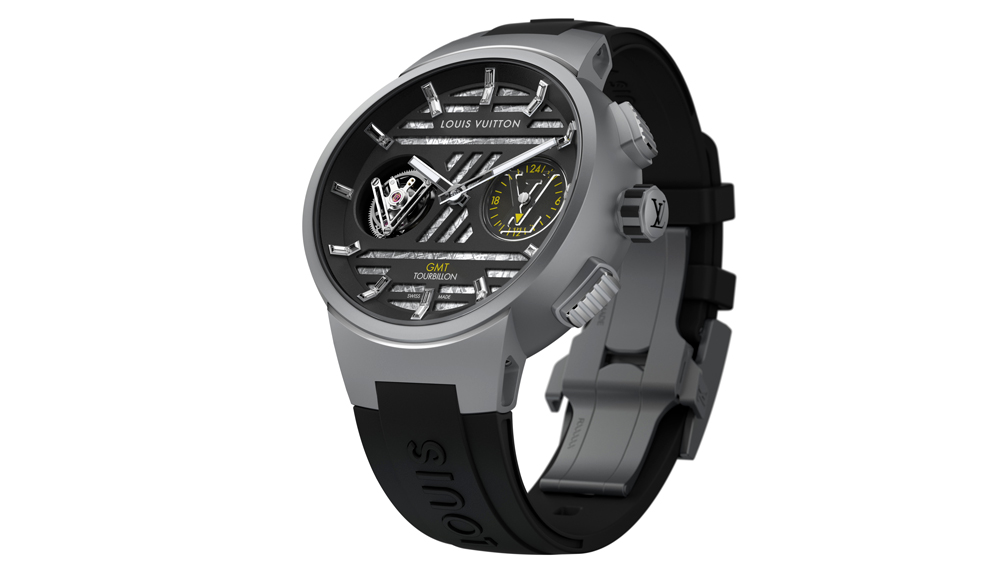 Unveiled at Watches & Wonders in April, the new Tambour Curve GMT Flying Tourbillon from Louis Vuittton comes in a full titanium execution that features an openworked dial set with pieces of the Gibeon meteorites that landed in Namibia in prehistoric times. Note the hour markers, set with baguette-cut diamonds, and the bold, graphic design, a signature of the original Tambour watch, introduced in 2002 as an ode to “the architecture of the most stunning international airport terminals.” The piece, available at select Louis Vuitton stores, retails for approximately $100,000. 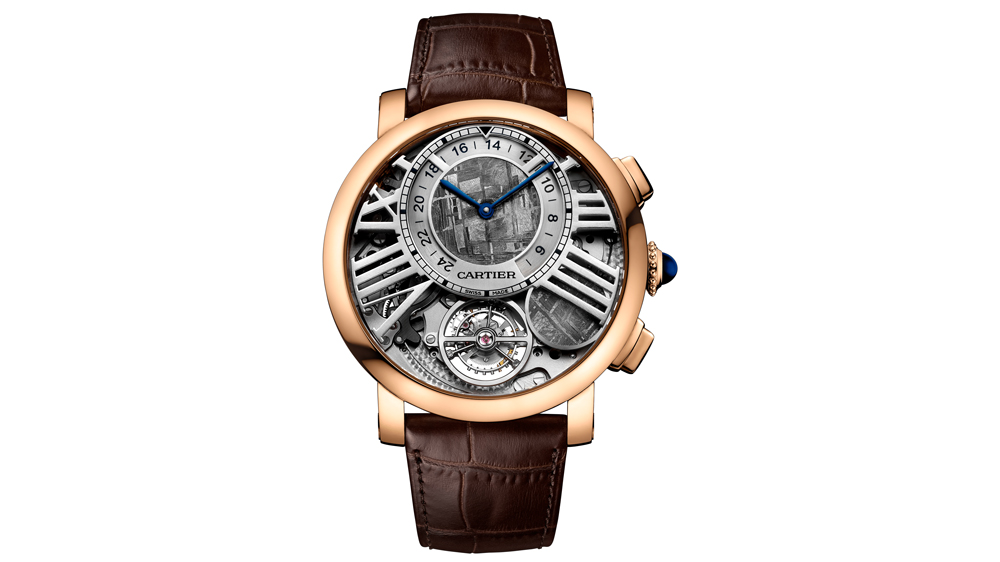 Introduced in 2016, the Rotonde de Cartier Earth and Moon watch predated the current vogue for meteorite dials, yet remains as on-trend as ever. The 47 mm 18k rose gold case frames a dial featuring two inset discs of meteorite, one for the main time display and another for the moon phase indicator. Available by appointment only at select Cartier boutiques, the piece is priced upon request.

Louis Moinet Man on The Moon 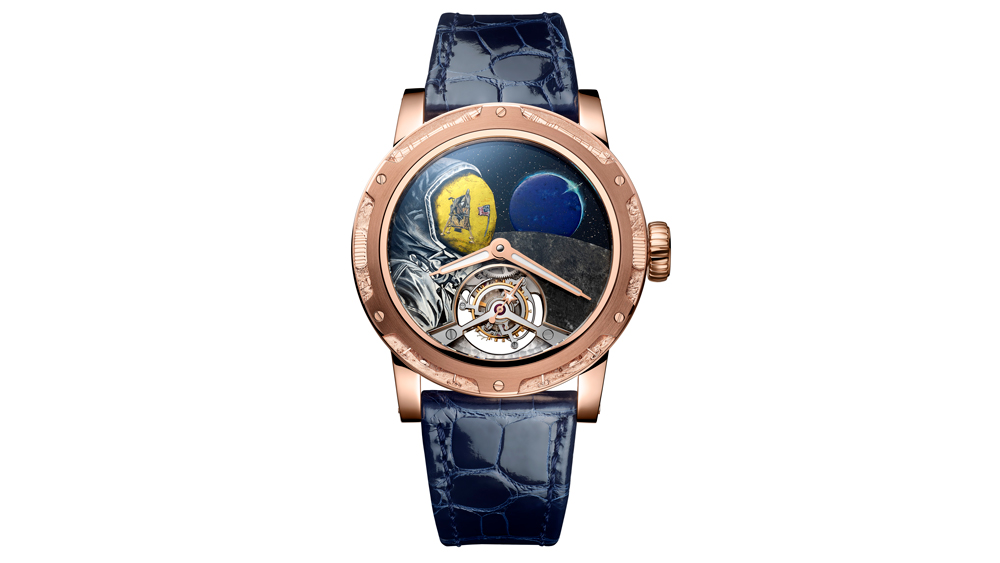 Sold as a set of four “Moon Race” timepieces that pay homage to different milestones in the race to explore Earth’s only satellite, the Man on The Moon model from independent watchmaker Louis Moinet honors the momentous Apollo 11 moon landing on July 20, 1969. On the dial, a miniature painting of an astronaut sits beside a piece of a lunar meteorite named Dar Al Gani 400, representing the moon. Discovered on earth in 1998, the lunar anorthosite rock was ejected from the moon following the impact of a celestial object. The quartet of watches, introduced last month at Watches and Wonders Geneva, retails for $1,250,00.

Omega Speedmaster Grey Side of the Moon 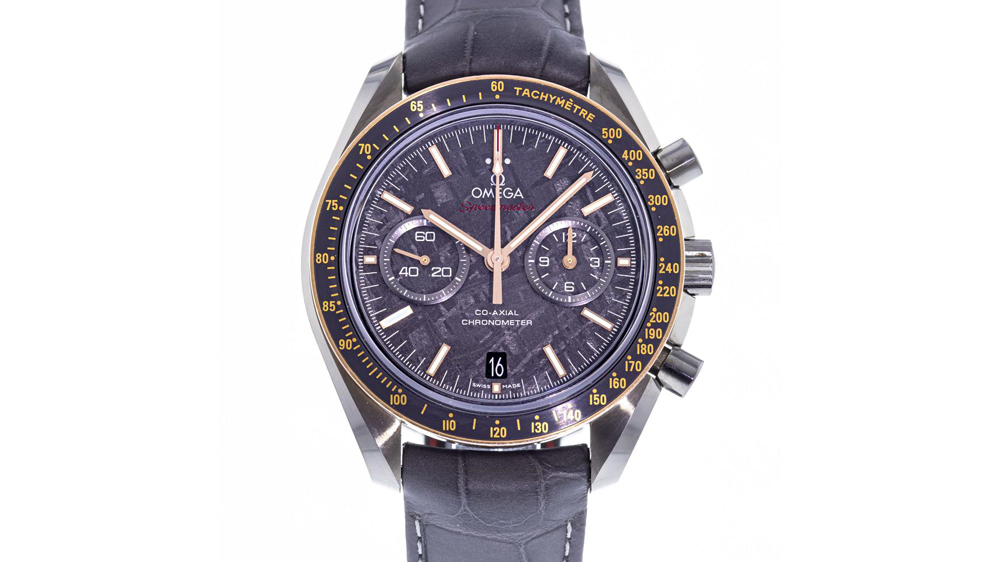 Omega Speedmaster Grey Side of the Moon Crown & Caliber

The Gibeon meteorite on the dial of this pre-owned Omega Speedmaster, aptly nicknamed the “Grey Side of the Moon,” has a dark gray sheen designed to evoke the lunar dust that casts a steely pall across the moon (at least according to astronaut Jim Lovell, who described the planetary body as “essentially grey” during the Apollo 8’s lunar orbit). Housed in a 44 mm grey ceramic case, the $11,625 model is the perfect embodiment of the Speedmaster’s five-decade-old moon watch narrative.