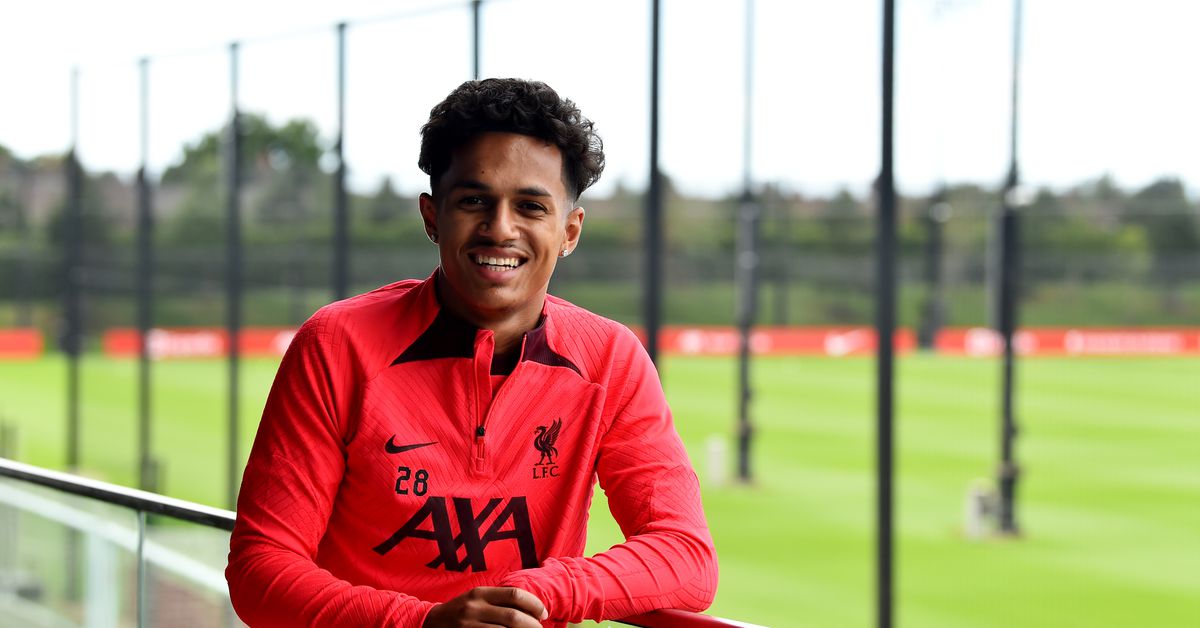 Fabio Carvalho: “Amazing Feeling To Be Here At One Of The Biggest Clubs In The World”

After widely being announced that Fabio Carvalho would be joining Liverpool weeks, if not months, ago, the youngster finally put pen to paper and was unveiled as a Red. The young attacking player gave his first interview, covering a wide range of topics. He started out with what it felt like to sign for one of the best clubs in the world.

“I’m a bit speechless, to be fair. It’s just an amazing feeling to be here at one of the biggest clubs in the world, if not the biggest. So, I’m just happy to be here and I can’t wait to get started.”

While news broke about Liverpool working on a deal for Carvalho late in the January transfer window, the transfer did not go through in time, leaving the status in limbo. The youngster had to play the second half of the season with rumors swirling, but he spoke about how he had to refocus on finishing the season with Fulham, as well as knowing Liverpool were the club for him.

“To be fair, I had a bit of interest from a lot of clubs but I didn’t let that get to my head because obviously I had a season to focus on. Once you hear that Liverpool are interested, there’s only one thought in your mind, which is to join them and try to be in and around the team. Hopefully I can achieve big things.”

There were plenty of people for Carvalho to speak about with regards to Liverpool. Former teammate Harvey Elliott made the move from London to Merseyside, and Harry Wilson and Neco Williams also were on hand with the Cottagers to share their insights on the club.

“I don’t think you really need any persuasion to become a Liverpool player because of how big the club is. But I spoke to him (Harvey Elliott) and he just said great things. I spoke to Neco [Williams] and Harry Wilson and they had nothing but great things to say about Liverpool. So, it was kind of an easy decision.”

Liverpool’s new number 28 also spoke about specific reasons for joining Liverpool, including believing Jürgen Klopp can help him grow as a player, and his belief that he can join many of the current Liverpool squad in being regarded as some of the best in the world.

“One of the main reasons I joined was because of him (Klopp); I’ve seen what he’s done to develop players to the next step and I’m sure he’s the right person to do so with me.”

“Yeah, there’s some big names and I’m looking to make a big name for myself as well. There’s big players and I’m just looking forward to learning from every single one of them, from their different experiences. I think they’ll be able to help me and hopefully I’ll be able to help them.”

Carvalho also spoke about the tight-knit feel of the club and how that resonated with him.

“The togetherness within the team, everyone just seems so close. I know it’s a bit of a clichéd thing to say but it feels like from the outside I can see it as like a big family. Even when things don’t go too well, everyone sticks together. It helps players individually, especially the young players, so I’m looking forward to that.”

He also spoke of how important family is to him, and how thankful he is to share the important moments with them.

“[T]hey help me each day and kept me going because family is one of the most important things. Being able to share these moments with them is everything to me because they mean a lot, as well as my friends and my girlfriend as well. Being able to have everyone around me is what dreams are made of. But I always tell myself, I haven’t really made it because there’s always a next step and I’m always looking to get better each day. Hopefully they’re proud of me as much as I’m proud of myself.”