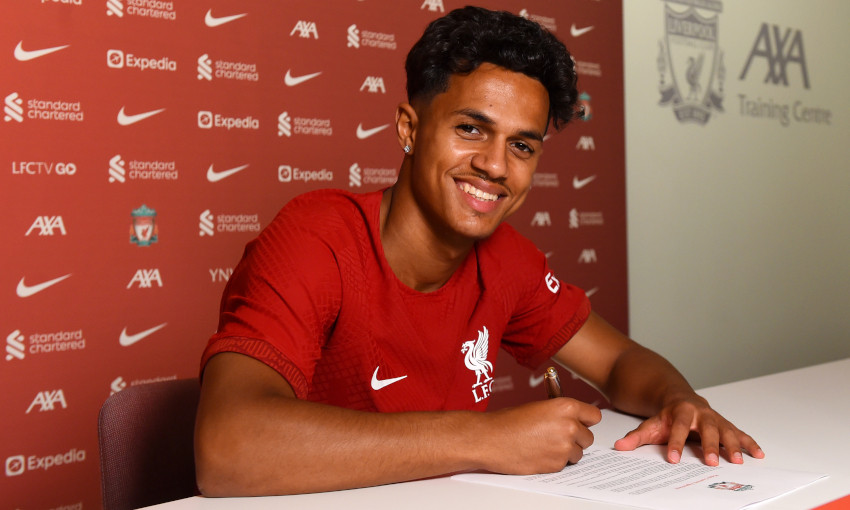 Fabio Carvalho has today been officially unveiled as a Liverpool player after completing his move at the AXA Training Centre.

The Portugal U21 international joined the Reds on July 1 following a breakthrough 2021-22 campaign during which he was a key figure in Fulham’s promotion back to the top flight.

Carvalho contributed 10 goals and eight assists as the Cottagers won the Championship title last term, earning the exciting forward a place in the division’s PFA Team of the Year.

The 19-year-old joins Darwin Nunez and Calvin Ramsay in bolstering Jürgen Klopp’s squad this summer and will report for day one of pre-season on Monday.

“It’s just an amazing feeling to be here at one of the biggest clubs in the world, if not the biggest. So, I’m just happy to be here and I can’t wait to get started,” Carvalho told Liverpoolfc.com in his first interview.

“Once you hear that Liverpool are interested, there’s only one thought in your mind, which is to join them and try to be in and around the team. Hopefully I can achieve big things.

“I spoke with everyone, and the manager, and it just felt so natural. When things become natural it’s just so much easier to make a decision.”

Born in Lisbon, Carvalho moved to England with his family as a youngster and developed through the academy ranks at Fulham.

He achieved his senior debut in September 2020 and made four appearances, scoring once, in the closing weeks of the 2020-21 Premier League season.

His progress then accelerated again during the past campaign as his influential performances aided the London club’s accumulation of 90 points and 106 goals en route to lifting the Championship title.

“Marco Silva, the way he plays football and made us play football, is more like attacking football and getting goals, which is similar to how Liverpool play, which is to score goals and dominate games,” added Carvalho, who will wear the No.28 shirt at Anfield.

“That’s what I’m here to do, to be able to help the team with my assists, creativity and goals. I’m looking forward to it.”