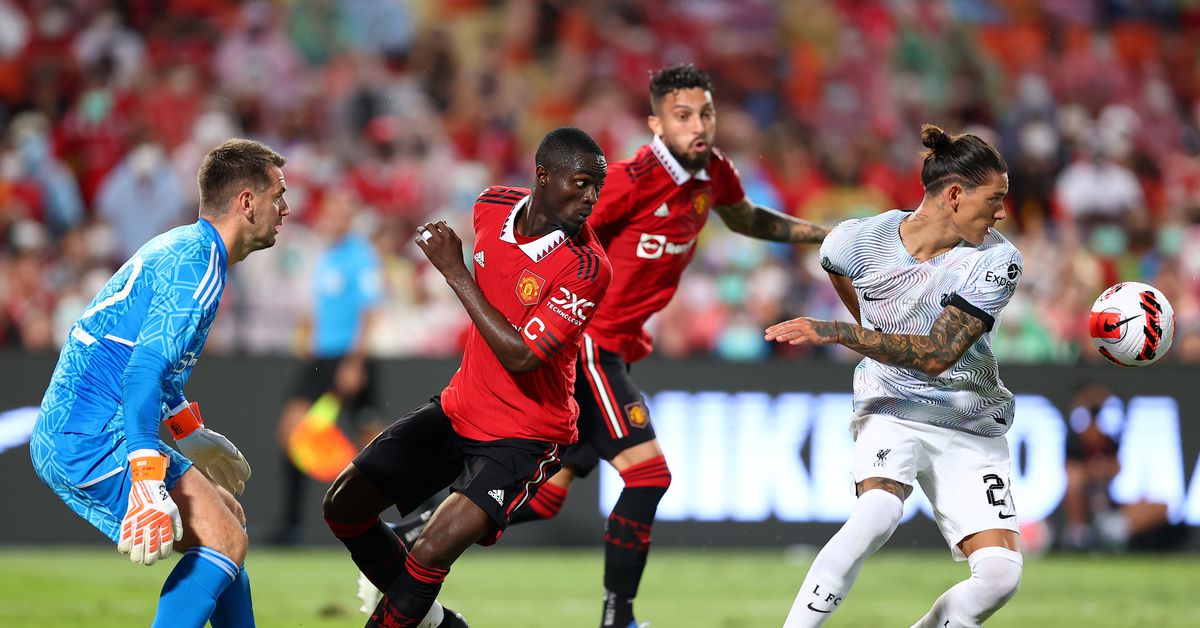 The build-up was lovely! There’s something really special about pre-season tours, particularly after it’s been a while since the team toured for a specific geographical fanbase.

The Reds aren’t in full fitness at this point in pre-season, so this could be a bit disjointed an ugly. That said, there are shiny new signings to look at here…

hahaha. Quite the mixed bag. Pre-season is funny, isn’t it?

Liverpool stopped by David De Gea on a number of occasions, while Manchester United found a lot of joy on the counter attack. United were clinical while Liverpool became adept at hitting the woodwork. Defensive errors in organization and clearances cost the Reds, suggesting, as expected, that some cobwebs need to come off.

Tyler Morton was a standout early on, while the likes of Luis Díaz and Fábio Carvalho — who was unlucky not to score — shone. Harvey Elliot started well, though had faded somewhat by the end of his period on the pitch.

It was fun to watch, but Manchester United were clearly a week ahead in pre-season, and absolutely pounced on the individual errors that a rusty Liverpool side provided.

On Manchester United’s part, Jadon Sancho looks to be settling in: his finish was taken comfortably after briefly swapping from the right side of attack to the left to confuse the defense.

Well, if you come in cold against a warmed-up you can concede, and Liverpool did just that after the rotation. The changed side then settled in a bit.

An early moment of fun was a Joël Matip long-ball to an advanced James Milner, who took the ball down with his best Díaz impression. The shot was tame.

“The shot was tame” is perhaps the tagline of the first half portion of this lineup’s match — Manchester United provided the opportunities for the Reds, but the final efforts lacked power and decisiveness.

The adults came on and it was clear, though the rust remained. A Trent Alexander-Arnold to Mohamed Salah back to Alexander-Arnold move almost came off, but the final pass to Darwin Núñez was intercepted — arguably a good thing since it was frankly too good for a preseason game.

Liverpool remained extremely dedicated to getting into good positions and simply not scoring: perhaps best encapsulated by Mohamed Salah alone at the back post in the final seconds. Manchester United naturally scored their one chance of the section.

Not the best day, but full of a lot of promise once all the moving parts come together.

Final Thoughts and Man of the Match

It felt more of a set of disparate parts than a cohesive whole, which is to be expected given how recently preseason started — they’re still in the fitness phase.

Who was your man of the match?

Who was Liverpool’s Man of the Match against Manchester United?